Why is Total Protein Normalization Important?

If you love Western blotting as much as we do, you’ll have noticed a growing trend toward using total protein staining rather than housekeeping proteins to normalize for load. But what does total protein normalization (TPN) involve and what advantages does it offer? Read on to find out and get your hands on a free sample of TotalStain Q – our newest reagent for total protein staining.

For many years, researchers have used housekeeping proteins such as actin, tubulin or GAPDH to normalize Western blot loading. These are usually detected alongside the target of interest – either in parallel or by stripping and re-probing the blot – before being used to determine the relative target abundance in different samples. This is achieved by dividing the signal intensity of the target by that of the housekeeping protein in each lane.

Although TPN is based on a similar concept, it uses the entire protein content of each sample for normalization instead of relying on only a single housekeeping protein. You can see an example of total protein staining in the figure below, where we’ve used TotalStain Q to detect total protein in six identical samples of HeLa lysate before immunodetecting pSTAT3. 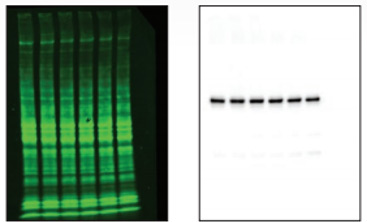 What are the advantages of TPN?

As well as providing a quick visual confirmation that protein transfer is even across the membrane before researchers move ahead with labor-intensive immunostaining protocols, TPN delivers more accurate quantification than using individual housekeeping proteins.

One reason for this is that TPN accounts for lane-to-lane variations inherent in Western blotting. TPN also overcomes the problem of experimental treatments influencing housekeeping protein expression, since the entire protein population of the sample is considerably less susceptible to change than a single housekeeping protein.

When should I use TPN?

Anyone performing Western blotting can benefit from TPN. Moreover, with TPN fast becoming the new standard required by journals for Western blot quantification, there has never been a better time to switch from using housekeeping proteins for normalization.

How can I get started with TPN?

Whether you’re new to TPN, or you’ve already introduced total protein staining into your Western blotting workflow, you should consider giving TotalStain Q a try. Contact us today for a free sample and we guarantee you’ll never look back.

TotalStain Q adds just a short dye-and-wash step to your protocol between protein transfer and blocking buffer incubation and is compatible with subsequent Western blot detection using enhanced chemiluminescence or Near Infrared (NIR) fluorescence. Provided your imaging system has a green (Cy3) channel or a Safe-Dyes channel, there’s absolutely nothing stopping you from making TPN part of your Western blot routine.
To learn more about how TPN solves the issues associated with using housekeeping proteins to normalize for load, take a look at our webinar.

Emma spent over a decade in the lab running immunoassays for early stage drug discovery programs before becoming a full-time scientific writer. Western blotting is her favorite immunodetection technique and she loves learning how new imaging systems are designed to improve it. 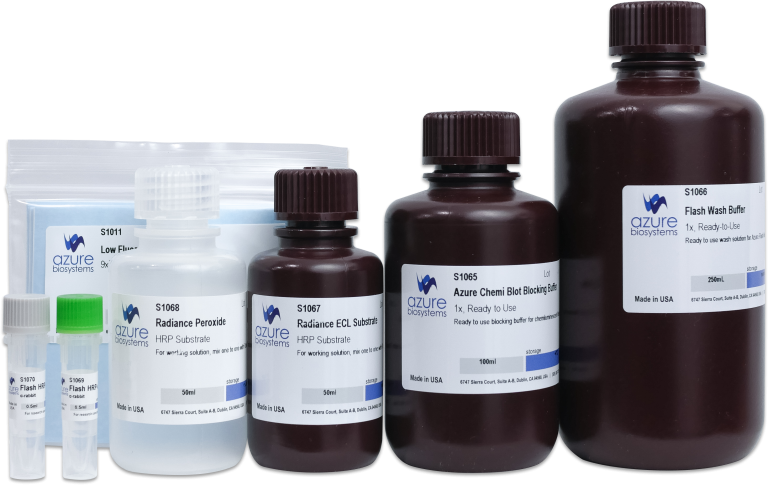