Western blotting is a widely used analytical technique that can identify one or more specific proteins in a complex mixture of proteins. It is a powerful tool that provides information about the presence, size, and under the right conditions, even the amount of a protein. Though commonly used and often routine in many labs, Western blotting can be source of frustration when it doesn’t work. It involves several steps, each of which needs to be optimized to achieve the best results. The key to the best Westerns is understanding the process. We’re here to help with some answers to your most commonly asked Western blotting questions.

What are some of the detection methods used in Western blotting?

Several options are available to detect Western blots, with chemiluminescence is likely the most common. Other means of detection include fluorescence, near-infrared fluorescence, colorimetric, and radioactive.

What is chemiluminescent detection?

In general, fluorescent detection can detect picograms of protein while chemiluminescence can detect protein in the femtogram range.

Is HRP a chemiluminescent substrate?

What is a chemiluminescence substrate?

Help! Why do my Western blots look terrible?

One of the most common questions when troubleshooting problematic Western blots is, “Why is the background so high?”

High or uneven background doesn’t only look bad- it also interferes with data analysis, making it difficult to quantify bands or compare bands between samples. There are several things you can do to reduce background and increase the signal-to-noise ratio on your blots. Read on for steps to help you achieve high-quality data and publication-worthy images!

Make sure your blotting and wash buffers are made fresh. You may want to filter them to remove dust or particulates that may be deposited on your blot and interact with your antibodies or other components of the blotting protocol.

STEP 2: Use the correct blocking agent

Make sure you select a blocking agent that doesn’t interact with your antibody or block your epitope! Commonly used protein-based blocking agents can be problematic in specific situations, particularly with anti-phosphoprotein antibodies.

Unsure which blocking buffer to use? Click here for a free sample

Make sure you use sufficient wash buffer, wash for a long enough time, and agitate the membrane well during wash steps. Any non-specifically bound antibody left on the blot is going to contribute to high background. You may also consider adding additional detergent or changing the detergent in the wash buffer.

When over-exposed, any blot can appear as solid background. Ideally, the signal from specific bands is much stronger than any background noise and a short exposure will pick up only the specific signal. If using film, be prepared to expose the blot multiple times to different pieces of film for increasing periods of time to find the optimal exposure. Imaging with a CCD camera makes capturing multiple exposure times even easier.

If using an ECL detection system, find a detection reagent with a stable, long-lasting signal (like Radiance ECL) so exposure times are predictable and reproducible, and the signal doesn’t decay so rapidly that you cannot conduct multiple exposures.

This is a situation where some initial work up front can save you a lot of time down the line. Using too much antibody can increase the amount of antibody that binds non-specifically to the membrane. Start with the antibody dilution recommended by the antibody provider.

3 Things to Keep in Mind for Fluorescent Western Blots

With these tips, you’re on your way to reducing the background and getting clean, clear Western blots. If you still have questions, fill out the form on the right and one of our experts will reach out to assist.

How to Optimize Your Chemiluminescent Western Blots

Why is the background on my Western blot so high? Why is there low (or no) signal?

Keep in mind that other buffer components used in washes or to dilute components can affect the reaction. Anything that impairs enzyme activity or alters the substrate will prevent the production of the light signal. Avoid using Tween-20, as it can cause high background. Instead, use Azure Chemi Blot Blocking Buffer to help reduce background and improve signal-to-noise ratios on your Western blot.

Chemiluminescent detection depends on an enzymatic reaction so timing and the amount of both enzyme and substrate used have important effects on data quality. Light will only be produced while the enzyme has access to the substrate, so the blot must be imaged before the substrate is consumed and before the light signal decays. The exposure time needed to detect the signal increases as the signal declines over several minutes, leading researchers to conduct multiple exposures to try to capture the perfect image before the signal decays.

Best substrate to use for chemiluminescent Western blots

Some commercial substrates are modified to extend the lifespan of the light signal to hours rather than minutes, which can provide the researcher with more flexibility when imaging. That’s where Radiance comes in. Radiance is a specially formulated, chemiluminescent substrate designed to produce a strong, long-lasting signal for large linear dynamic range and quantitative data.

A longer-lived signal improves reproducibility between experiments because the signal remains constant for a longer period of time, reducing the effect of slight differences in elapsed time between substrate incubation and imaging.

Is film or digital imaging better for chemiluminescent Western blots?

The chemiluminescent signal is usually detected either by exposing the blot to film, or by using a CCD camera. Film is expensive due to the cost of the film and of the reagents and equipment needed for developing. Film has a relatively small linear range, so the chemiluminescent signal may become saturated. It might not be possible to capture bright and dim bands with the same exposure.

Digital imagers that use a CCD camera provide a larger dynamic range, overcoming this limitation of film. Digital imaging saves time, giving instant results so researchers can quickly determine whether the selected exposure time is sufficient rather than waiting several minutes to develop film, during which time the chemiluminescent signal may be decaying. Digital imaging outputs data that can be directly analyzed using densitometry to obtain quantitative information.

Both the Azure Imagers and the Sapphire Biomolecular Imager include chemiluminescence imaging in addition to many other imaging modalities; find the system that best fits the needs of your lab by clicking below. Azure Imagers also allow you to use multiple binning options to collect more light.

What is chemiluminescent detection?

With chemiluminescent detection, a primary antibody binds to the target protein on a membrane, and the location of the primary antibody is detected using a secondary antibody conjugated to an enzyme such as horseradish peroxidase (HRP) or alkaline phosphatase (AP).

A substrate for the enzyme is added and when the enzyme acts on the substrate, light is emitted (Figure 1). The light can be detected using an imager with a CCD camera or x-ray film. The sensitivity of detection depends on the choice of substrate—commercially available substrates for HRP can detect proteins in the femtogram range.

How do you use chemiluminescence to detect proteins? 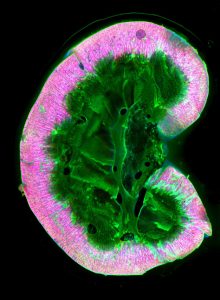 The Sapphire Biomolecular Imager can do so much more than image gels, blots, and microwell plates. With its 25 cm x 25 cm scanning bed, the versatile Sapphire can scan tissues and even small animal models such as mice, zebrafish, and Xenopus oocytes, to study tissue morphology or gross anatomy.

Bakela et al took advantage of this capability of the Sapphire Imager to study liver morphology in a recent publication. The group investigated the ability of soluble major histocompatibility complex II (sMHCII) molecules to rescue symptoms of autoimmune hepatitis (AIH) in a rat model of the disease.

Chronic AIH is characterized by a T-cell-mediated autoimmune response that attacks the liver. The disease is usually treated with immunosuppressive drugs. New and specific therapies are needed to better treat the disease and to avoid the side effects associated with long-term use of immunosuppressants.

The authors set out to test whether sMCHII molecules could rescue liver damage in a rat model of AIH. These molecules are hypothesized to help maintain immune tolerance and promote immune system suppression, protecting against autoimmunity. Promisingly, sMCHII molecules had been tested previously in a model of systemic lupus erythematosus and found to decrease the amount of autoantibodies and improve symptoms.

To characterize the liver damage that occurred in the AIH rat model, the authors collected and fixed livers from the rats and then scanned them on a Sapphire Biomolecular Imager using white light as well as four-channel fluorescence. The four-channel images, detecting tissue autofluorescence, provided detail of the gross anatomy and morphology of the liver tissue. Treatment with sMCHII appeared to rescue the fibrotic and necrotic changes that were observed in the livers of untreated rats, leading the authors to propose this approach could lead to new therapies for AIH.