Western blotting was first described by three groups in 1979. Since then numerous refinements to the basic technique, reagents used and imaging technologies have massively broadened the usage of Western blotting, making it a cornerstone protocol in life sciences today.

However, the general workflow of a Western blot has remained the same throughout this time. Samples are isolated and protein is extracted and standardized. Proteins are then separated by gel electrophoresis, transferred and probed with primary and secondary antibodies before being visualized. With numerous steps, Western blotting as a protocol requires a large investment in equipment, training, reagents and, perhaps most importantly, time.

A standard Western blot protocol takes two days to work from sample to image. Therefore, when analyzing a large number of samples or performing optimizations, it is easy to see how Western Blotting can quickly become a bottleneck in your research workflow.

What is In-cell Western blotting?

Enter in-cell Western blotting – a radical rethinking of the standard protocol coupling the ability to accurately quantify intracellular proteins from Western blotting with the repeatability, quick turnaround and high throughput of an ELISA. Cells are grown on sterile plates, before being fixed and permeabilized in situ. Subsequent labelling is performed as normal with a specific primary antibody followed by an isotype specific fluorescent conjugated secondary antibody. Conjugates in the near-infrared (NIR) spectrum are commonly used to reduce auto-fluorescence and noise typically associated with tissue culture plastics. 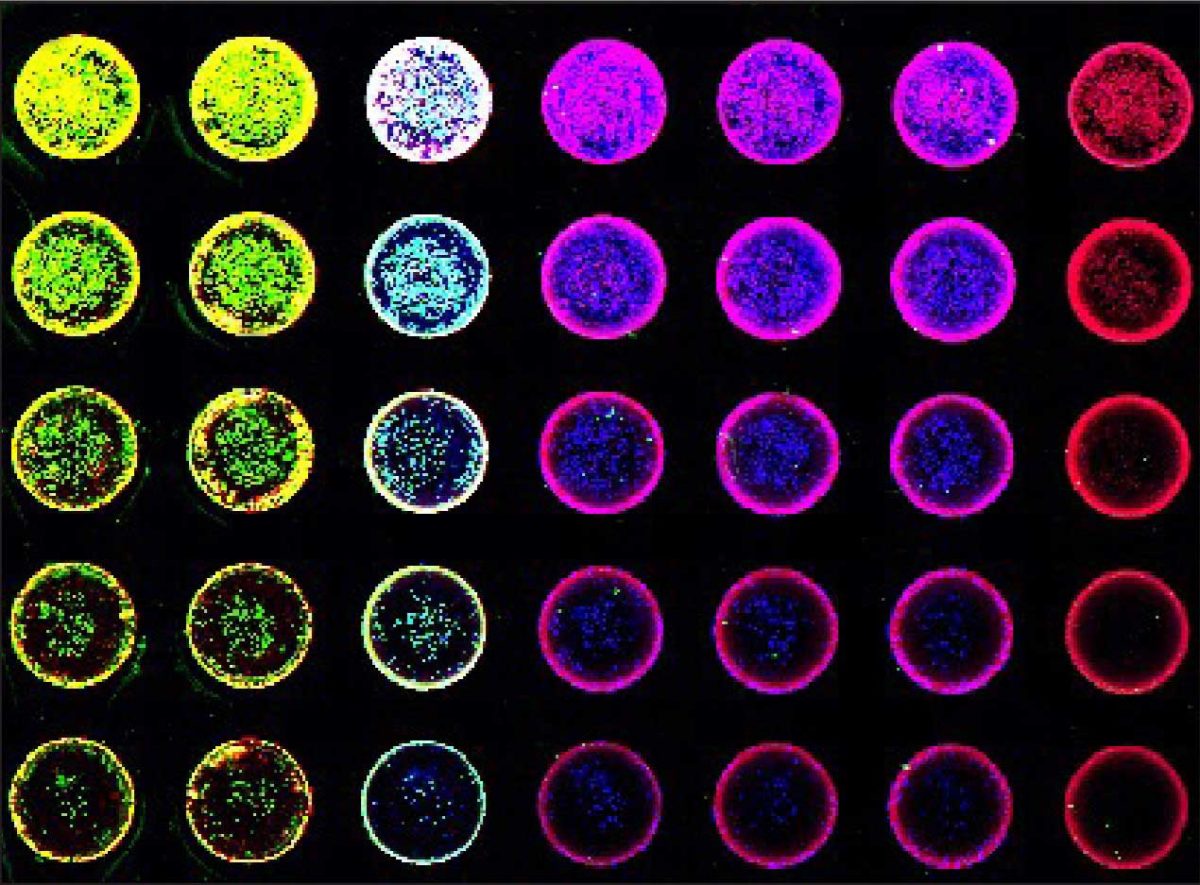 The Azure Biosystems Sapphire™ Biomolecular Scanner is specifically designed to allow for visualization in two NIR channels (658 nm and 785 nm) as well as visible fluorescent wavelengths (488 nm and 520 nm), allowing for multiplex imaging within wells. This multiplex capacity allows for the assessment of multiple proteins of interest in a single well which is useful for looking at total and phosphorylated versions of a protein or to detect an in-well standard to allow for quantification across a plate.

In the application note below, we demonstrate the ability to quantify intracellular proteins in-situ using the Azure Sapphire.

HeLa cells were serially diluted and seeded into a sterile 96- well tissue culture plate at a volume of 0.2 mL per well, and grown until approximately 80% confluent. All wells were fixed and permeabilized using 100% methanol for 15 minutes at room temperature.

Following fixation and permeabilization, cells were rinsed in PBS, blocked with 1% fish gelatin in PBS for one hour at room temperature, then probed for alpha-tubulin and beta-actin overnight at 4°C. Samples were washed three times with PBS prior to incubation with AzureSpectra 550 and AzureSpectra 800 conjugated secondary antibodies for 60 minutes.

Secondary antibodies were incubated along with RedDot™1 Nuclear Stain to normalize for total cell number. Plates were washed as previously described before imaging.

After washing, the plate was imaged with the Sapphire using the Plate Focus Setting.

HeLa cells were grown in a 96-well plate probed with alpha-tubulin and beta-actin antibodies followed by isotype appropriate secondary antibodies conjugated with AzureSpectra 550 and AzureSpectra 800 respectively. All wells were incubated with RedDot™1 Nuclear Stain to normalize for total cell number. Images were acquired using an Azure Biosystems Sapphire™ Biomolecular Scanner and are displayed in Figure 2. The representative image shown demonstrates the high level of sensitivity and specificity achievable.

Use Cell-Based Assays to Detect Immunofluorescence in 384-Well Plates

Although Western blotting is an established technique for detecting a specific protein within a complex sample, it has several inherent shortcomings. These include a lengthy workflow, low throughput, and limitations in the number of replicates, leading many researchers to seek an alternative method. This is where quantitative immunofluorescence in tissue culture, also known as in-cell Western blotting (ICW), comes in. Despite not having quite such a catchy name as Western blotting, the ICW is a simple technique that offers many advantages and is fast becoming a mainstay of many laboratory workflows.

How does quantitative immunofluorescence in tissue culture work?

A major difference between Western blotting and ICW lies in how samples are prepared. While Western blotting requires that proteins be extracted, separated on a gel and then transferred to a membrane for detection, ICW is a newer method that uses cells cultured in 96- or 384-well microplates as the assay input.

During a typical workflow, cells are fixed (and permeabilized where targets are intracellular) in the microplate wells before being immunostained using fluorescently-labeled antibodies. The microplates are then read using a laser-based scanner, such as the Azure Sapphire Biomolecular Imager.

What are the advantages of in-cell Westerns as quantitative immunofluorescence?

Quantitative immunofluorescence in tissue culture provides many advantages over traditional Western blotting. First, because samples are prepared in microplates, assay throughput is significantly increased. This enables screening of multiple treatments in parallel, using a broader range of dilutions, and allows for a high number of replicates to increase the statistical significance of results. Greater throughput also provides time and cost savings, which are enhanced by the lack of requirement for specialized gels.

Another important advantage of quantitative immunofluorescence in tissue culture is that it conserves antigens in their quaternary structure and cellular location. The latter is especially useful to study trafficking of transmembrane receptors – something that is impossible when cells must be lysed for Western blot analysis. Quantitative immunofluorescence in tissue culture also benefits from high intra- and inter-experiment reproducibility, unlike Western blotting that can vary considerably between gels and between experiments run on different days.

What can in-cell Westerns be used for?

Because ICW are an incredibly flexible technique, it can be adapted for many different applications. These include monitoring changes in protein expression following RNA interference (siRNA), or in response to different concentrations of a treatment, and evaluating the occurrence of post-translational modifications upon treating cells with a particular stimulus or inhibitor.

In-cell Western blotting can also be used to study protein movement. In addition to analyzing transmembrane receptor trafficking, it is possible to follow the binding of fluorescently-labeled ligands to cell-surface receptors and to monitor their subsequent uptake. Where quantitative immunofluorescence in tissue culture is adapted to a fluorescent immunofocus assay, it allows the infectivity of non-cytopathic viruses to be investigated.

How do I read my plates with in-cell Western blotting?

You will need a laser scanner to be able to read from the bottom of a microwell plate. This scanner is essential to measure the readout from quantitative immunofluorescence in tissue culture. Camera-based systems are unsuitable as they image the microwell plates from above, allowing efficient imaging of only the bottom of the wells in a vertical line to the camera, although it is possible to circumvent this issue by using multiwell chambers and imaging each chamber slide separately.

The Sapphire is the answer for quantitative immunofluorescence in tissue culture. A serial dilution of HeLa cells was seeded into a 96-well plate, cultured, fixed and permeabilized. Columns 1-3 were probed for beta-Actin using AzureSpectra 550 (green), columns 3-6 were probed for Tubulin using AzureSpectra 800 (blue), and the entire plate was stained with RedDot1 Nuclear Stain as a normalization control (red). The individual channels were scanned simultaneously then combined into a single composite image using the Sapphire Capture Software.

The Sapphire offers several advantages over other commercially available laser scanners, such as the benefits of 10-micron resolution (the highest on the market),  with software that provides precise focal plane adjustment, as well as an automated Z-scanning function is used to find the focus of microplates of different brands.

It also enables true multiplexed detection by using the NIR 700 (685nm laser) and NIR 800 (784nm laser) channels for target detection, both of which produce low autofluorescence and high signal-to-background ratios, meaning they can detect even low-expressed targets – and the green channel (520nm laser) for normalization against DNA content or total protein, researchers can readily monitor two targets in parallel, using the third readout as a measure of target abundance relative to the number of cells.

Is there anything else I should consider for ICW?

While quantitative immunofluorescence in tissue culture is highly versatile, it does have a few limitations. The first of these is that the sample must be a homogeneous population of cells that can proliferate in a culture plate, ideally as a monolayer; tissue lysates cannot be used in this assay. Secondly, some Western blot-validated primary antibodies raised against lineal epitopes may not recognize their target during quantitative immunofluorescence in tissue culture; however, primary antibodies validated for immunofluorescence should work.

Finally, it is critical that antibody reagents do not demonstrate cross-reactivity in an initial Western blot experiment to determine specificity for each target. Although non-specific bands can clearly be seen on a Western blot, these will go unnoticed during quantitative immunofluorescence in tissue culture, making highly-specific antibody reagents essential to the production of meaningful results.