Linear range of detection and what it means for your quantifications

When quantifying Western blots many people assume it’s ok to simply image your protein of interest, strip, re-probe for their loading control of choice and then use this to normalize, without considering the linear range of detection. However, there are several pitfalls associated with this, and more and more journals are now asking for a proper defined normalization protocol, including evidence of linear detection, to be included with all manuscripts.

The linear range of detection is the region in which band intensity is proportional the amount of target protein on the membrane. As the amount of protein increases so should the band intensity. In the image below you can see where the issue lies, the linear range is marked with the blue box, outside of this region this proportional relationship is lost, especially at the extreme ends where the signal will be either completely over or under-saturated. 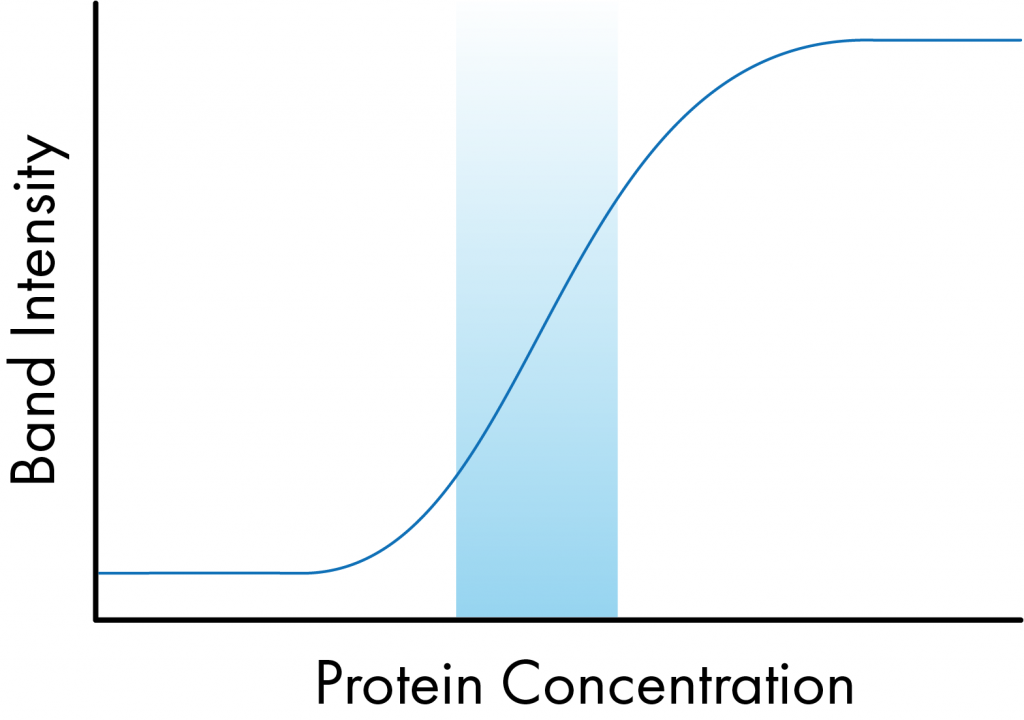 Things get more complex still when loading controls are factored in as Western blot quantification is only truly accurate if both the target protein, and loading control both have similar linear ranges. This is shown in the two graphs below; in the first where the linear ranges of detection overlap then quantification of proteins within this overlap zone will be fine. However, in the latter where they don’t overlap it is easy to see how changes in protein concentration can impact the band-intensity for one protein, but not the other. In this instance quantification is next to useless.

Determining the linear range is relatively easy, and can be achieved by taking a sample and performing a serial dilution. If the ranges overlap then determining the amount of sample to load is also similarly easy. However, if the ranges don’t overlap, as is common when assessing low-abundance proteins in association with a highly expressed housekeeping gene, then it becomes more difficult to accurately quantify. Furthermore, if your protein of interest is strongly up or down-regulated by your treatment then this can further interfere with your attempts to fit within the linear range.

What to do if your linear ranges don't overlap

Don’t worry! There are several options available. Here are two tips on what to do if your linear ranges don’t overlap.

This is an often-overlooked step. If you know your protein is expressed at relatively low levels then a loading control such as beta-actin will likely not be suitable. In these instances, using an organelle specific protein may prove more beneficial such as Lamin B1 or HSP60 as they should be less abundantly expressed, although care should be taken to confirm that expression of these is not altered by your treatments.

Transitioning from loading controls towards total protein quantification as a means of controlling for loading is the next thing you could try. By assessing the whole range of proteins over, or under-saturation becomes less of an issue generating a broader dynamic range. These stains include both in-gel and membrane stains and can be imaged in a variety of different ways. This technique is a great way to check both the quality of your protein separation and transfer efficiency.