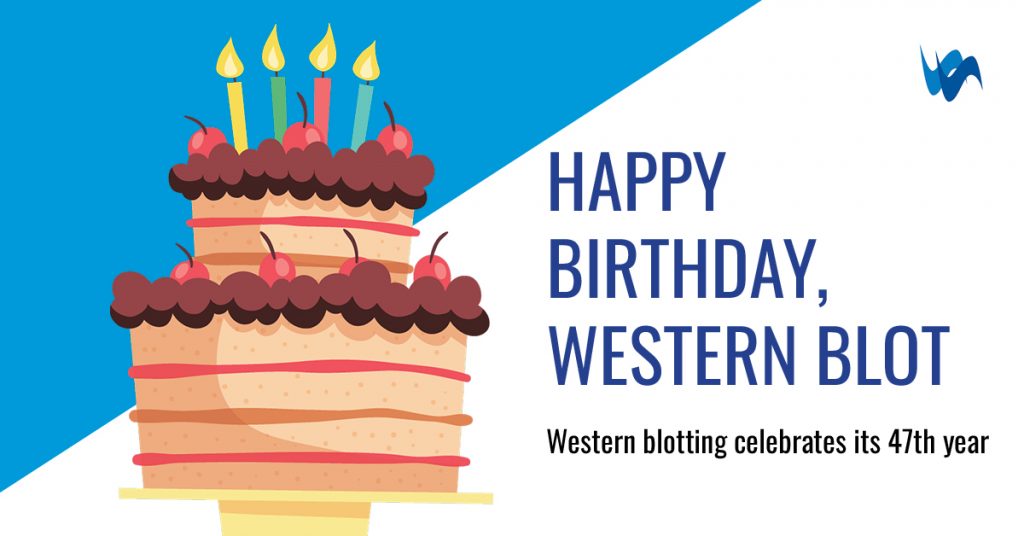 Toasting to a Tried-and-True Technique

As we enter a new year for science and continue making new discoveries that change the way we think and understand science, some aspects are thankfully staying just the same. In fact, 2022 marks the 47th birthday of the Western blotting technique! Azure Biosystems we’re excited to celebrate this tried-and-true method and all the scientific insights it has helped uncover over the years.

For those who aren’t familiar with the Western blot, it’s an analytical technique used to identify one or more specific proteins in a complex protein mixture. Scientists use it all the time to understand the presence, size, and even the amount of protein in their sample.

>> Interested in this technique for your own research? Learn about the step-by-step process in more detail with our Western Blotting Guidebook.

History of the Western Blot

The Western blot was first mentioned by George Stark’s team in their July 1979 publication—just two years after they invented the Northern blot. In September of the same year, Harry Towbin also published a paper that used a similar technique. This was later followed in 1981 by W. Neal Burnette’s publication, which included the very first mention of the name “Western blotting.” Interestingly, Towbin’s work has been cited more times than the other two publications combined.1

In either case, Azure Biosystems is thankful to all the brain power that went into creating the Western blot technique and the developments that the scientific community has made along the way.

How to Image Western Blots

Western blot imaging is usually done in one of two ways: film and digital. Film-based imaging was once the gold standard for imaging but has since been surpassed by digital imaging—thanks to the wider dynamic range, comparably lower costs, and ease of use. Digital imagers and analysis programs two great tools that can help you image Western blots carefully and accurately.

>> Discover the right Western blotting imaging system for you and your research needs.

Whether you’re trying out the Western blotting technique for the first time or it’s been a longstanding part of your research throughout your career, we’ve all got something to cheers for this new year. Azure Biosystems thanks all the scientists who created, developed, and continue to use the Western blot, and we’re excited to celebrate its birthday for many years to come.

Sapphire used in a Study that Addresses Sudden Cardiac Death

Because of this, it is imperative the main causes of such events are identified and used to effectively prevent and and lower the general public’s risk of sudden cardiac death. In an effort to help mitigate such risks, Grune et al published a study using an Azure Sapphire to further the scientific community’s knowledge on the subject using both mouse and human models by investigating the relationship between leukocytes and ventricular arrhythmia.

The myocardium is the muscular layer of the heart that is negatively charged on one side and positively charged on the other. Disruption of the normal rhythmic depolarization of the myocardium can lead to sudden cardiac death. One of the most common causes of sudden cardiac death is thought to be arrhythmias, or abnormal heart rhythms. When arrhythmias occur, the heart is unable to pump blood, which can subsequently lead to heart failure and ultimately death.

There are two types of arrhythmias: ventricular tachycardia (VT) and ventricular fibrillation (Vfib). They are considered to be some of the most common causes of sudden cardiac death. As such, preventing VT and Vfib may be an effective means of addressing this health concern. Historically, leukocytes have been considered an effective tool in preventing arrhythmias, but they may also contribute to rhythm disorders. In fact, some studies show that health conditions associated with an increased risk of arrhythmia are often also associated with major changes in myocardial leukocyte counts.

Macrophages and neutrophils are types of leukocytes that engulf and digest particles (including pathogens and dead cells) to defend the human body. The process of removing these particles is called efferocytosis. Macrophages are especially responsible for clearing away dead cells; if they do not, the accumulation of cellular debris may indirectly lead to VT. In this study, macrophages are particularly important because they remove dead cardiomyocytes, the muscles cells responsible for making the heart contract, which in turn can help a patient heal after ischemia.

The authors sought to identify correlations between leukocytes and ventricular arrhythmia and to also study how hypokalemia (low potassium levels) combined with myocardial infarction may trigger spontaneous ventricular tachycardia.

The authors established neutrophils incited ventricular arrhythmia in mice and determined a higher circulating neutrophil count was associated with a higher risk of early Vfib and VTand an adverse prognosisin patients with MI.

Using their mouse models, the authors determined a lack of macrophages (which remove dead cells) can impair efferocytosis and lead to a faster death rate in cardiomyocytes (muscles cells that are responsible for making the heart contract).

Post-MI was injected into the mice with an imaging probe that binds to the surface of apoptotic cells and the interior of necrotic cells. The mouse hearts were then processed and imaged with fluorescent reflectance imaging (FRI) on the Sapphire. The imaging probe primarily bound to infarcts and the researchers concluded that absence of macrophages can result in a increased death rate of cardiomyocytes and potential accumulation of these dead cells in mice.

Next, the authors investigated the role Mertk, a macrophage receptor that helps mediate efferocytosis and assists with mitochondrial removal from malfunctioning cardiomyocytes. The authors hypothesized that Mertk may help protect against post-MI ventricular arrhythmias like VT and Vfib., as deletion of Mertk receptors leads to lethal arrhythmias in mice with acute MI. Through several small experiments, they concluded that their hypothesis was correct.

Because of these results, the study concludes that macrophages, a type of leukocyte, are indeed effective at averting electrical storms after MI. In addition, macrophages play a large role in defending against post-MI arrhythmias such as VT and Vfib. Lastly, the study’s results demonstrate that unlike macrophages, neutrophils actually increase VT in mice and are closely associated with VT in patients.

This study importantly demonstrates that changes to the function of leukocytes like neutrophils and macrophages may prove to be useful therapeutic tools for reducing the likelihood of sudden cardiac death. A better understanding of these functions may eventually lead to effective anti-arrhythmic drugs.

Grune et al primarily employed the Sapphire Biomolecular Imager to collect fluorescent images of tissue sections, specifically, mouse hearts. It’s the ideal tool for enhanced quantitative imaging thanks to its stable fluorescent signals, which help achieve reliable quantitation across a wide dynamic range. In addition, the Sapphire’s multiplexing ability allows probing for multiple proteins on a single blot, expanding the amount of data that can be collected from each sample.

To learn more about the Sapphire Biomolecular Imager used in this study and how it can be an effective tool in your own research, contact us at info@azurebiosystems.com.